Pixel and I missed having a little black cat around so I went to the pound Saturday afternoon and I found this little guy in need of a new home: 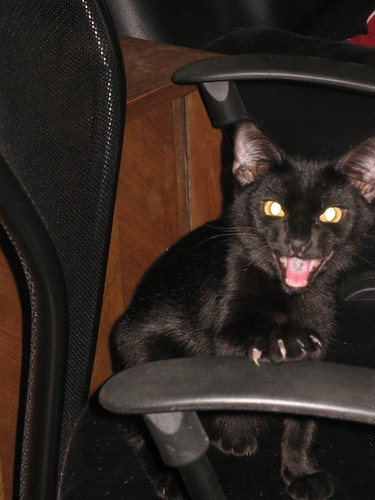 He's actually a very nice and happy kitten. He had some issues with Pixel at first but they seem to be doing better now (no Dargo isn't being beaten he's just whining and wants attention)

My little black cat died tonight. It was a sudden and surprising end to a great little cat.

I'm doing ok, but I will definitely miss that anti-social little critter (there's something cool about being loved by a critter that generally dislikes everyone else). 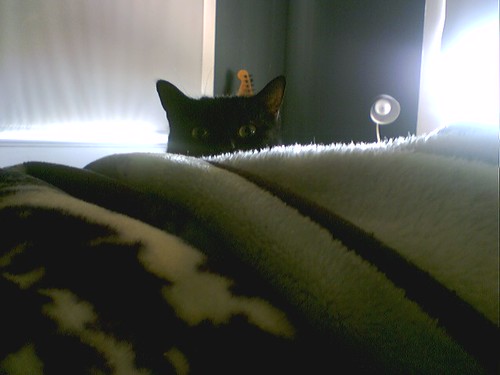 I'll miss you 'Tish, you were a great little cat.

Yes, it's true, I am still alive. Nothing particularly earth shattering has been going on lately, I've just been busy with work and then coming home to putter around the house and/or unwind depending on the day.

However my sister and nephews are en route to Virginia again with the last big batch of my stuff (this has got to be one of the slowest moves in history) and I'm looking forward to finally having all my stuff in one place again. I'll be able to grill! I'll have all my tools! toys! books! Of course then I'm going to promptly go through my things and throw out stuff that isn't useful any more (I didn't get a chance to do that when I originally moved out here because that move was so rushed).

I'm also hoping to get a little help wrapping up some house projects so with a little luck in a week or so my house will no longer look like a construction site (or at least it'll look a lot less like one).

A friend posted this earlier and it seemed like such a fitting song today. 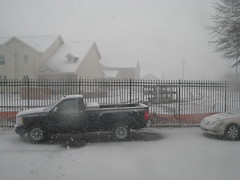 Brrrr.... snow... again.
Originally uploaded by dragonvpm
it's snowing again. I just took this picture from the door of the office out to the jobsite and my truck. When I got here this morning there was no snow on the ground, right now it shows no sign of easing up and in fact has just gotten heavier....

It's been snowing all day.

I planned ahead and had all of the necessities for myself and my critters on hand so I didn't have to leave the house.

I spent most of the day puttering around the house and going outside for brief bits with the dogs while they got used to the whole snow thing. It looks like tomorrow will be more of the same.

Click below if you want to see a few random pictures from our Satuday snow day: 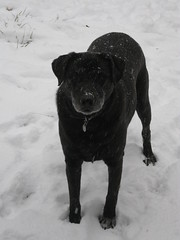 I was a bit ambivalent when I first saw the trailers for Kick Ass but this one has me genuinely eager to see the movie:

Oh, and in other movie news, I will also admit that after seeing the A-Team trailer I'm kind of looking forward to that movie too. Not because it's going to be a cinematic masterpiece, but because I've tried watching the old TV shows (that I loved growing up) and they're really really painful to watch. I seriously doubt they could make a movie that was worse than some of those episodes and I'm halfway thinking they might make a fairly amusing popcorn movie

It was a long day puttering around the house but the electrician made some major progress. He got rid of all the old fuses so now almost the entire house has been upgraded to circuit breakers. He'll be back tomorrow to sort out a few more wiring issues and after that I'll be ready to re-do the laundry room and add the utility sink I'd been wanting to.

It's great seeing my house projects moving in the right direction (i.e. completion). The only down side is that I'm likely to have to spend a decent chunk of time in the crawl space tomorrow as I sort out the plumbing for the washing machine and utility sink. Oh and I'll have to knock down a wall before I do that. So yeah, it's looking like a busy day.

Two days down and no accidents yet. Here's hoping they keep this up :-)
Collapse